Over the weekend, Hanamaki in Iwate Prefecture held its annual noodle-eating contest, an event that saw around 160 contestants wolf down incredible amounts of Wanko Soba. 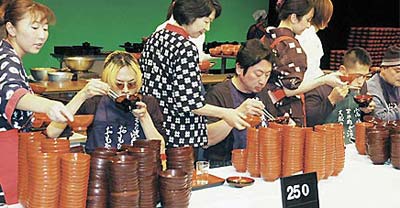 Now, with a name like wanko, the amusingly named buckwheat noodles could easily become an endless source of mirth and merriment, although thankfully not on Tokyo Times; such schoolboy fun potentially drawing attention away from Masahiro Kato’s winning wanko tally of 241 (bowls). 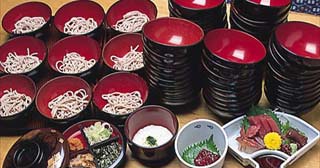 It seems that along with incredible stamina, the 38-year-old’s technique could well have been a contributing factor in his second straight title, as by using both hands, the soba specialist was able to deftly manipulate his bowls, allowing him to get in as much wanko as possible. The super slurper also kept his movements smooth and methodical, whilst at the same time avoiding any excessive tugging or jerking; an essential approach for anyone hoping to successfully beat off the opposition.

Unfortunately — and apparently not for the first time — controversy played its part in the proceedings, with several contestants claiming that Kato-san had been given a helping hand by one of the waitresses. An accusation the champion strenuously denies.