As Japan’s birthrate continues to fall, and its elderly get ever older, toy manufacturers have been quick to latch on to the new mature market. Last year’s Ifbot is a prime example, but despite its maker claiming the robot has the conversational ability of a 5-year-old, a price tag of 576,000 yen (2,880 pound) is enough to stretch even the most prosperous of pensioners.

Thankfully for the less affluent aged, Tomy has stepped in with its new Yumel doll. And at a cost of only 8,500 yen (42 pound), it means that potential buyers still have plenty of money left to stuff in tin boxes or squander at the local bingo hall. 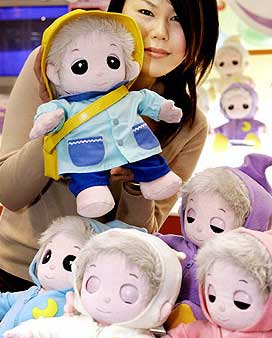 Tomy’s new toy is being billed as a ‘healing’ doll, and whereas similar products are aimed at daytime use, Yumel is being touted as a nighttime companion. Project leader Osamu Kiriseko claims that, â€œYou need to enjoy the night together if you really hope to live with a doll.â€

With this in mind, the name Yumel comes from the word ‘yume’ (dream), and it’s designed to look like a sleepy baby boy – albeit one with big and black manga-esque eyes. And to further enhance the sleepiness factor, the toy is equipped with six sensors and an IC chip, allowing the doll to accurately keep track of its owners sleeping patterns. Thus Yumel starts the day with a breezy â€œGood morning,â€ and ends it with drooping eyelids and a drowsy â€œGood nightâ€ after a quick pat on the chest makes it ‘fall asleep’. 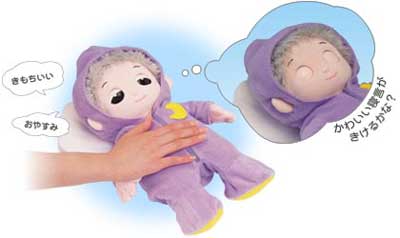 This programmable sleeping schedule allows Yumel to detect how regular its owner’s sleep pattern is, and if it judges that things aren’t quite how they should be, the doll will pipe up with, â€œAren’t you pushing yourself too hard?â€ But rather more sinister is Kiriseko’s claim that, â€œIf you lead an orderly life, Yumel will be in a good mood, singing songs or pleading with you to do something like buying him toys.â€