Recently a Japanese style restaurant in China caused something of a stir with its eating-sushi-off-near-naked-girls promotion. For the full story, and the added bonus of a slightly racy picture, just click here.

Sadly, having never attended such a cultural extravaganza, I can’t comment on the pros and cons involved. But it would appear that the authorities in Kunming (where the restaurant is situated) have decided to put a block on such activities once and for all. As they have banned any further promotions, and just for good measure fined the restaurant 2,000 Yuan.

Interestingly the financial penalty was imposed by the local health authority, who claimed that the ladies used during the meal lacked the necessary health certificates, and what’s more were improperly dressed! 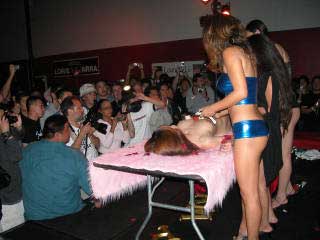