With a massive increase in the availability of cheap digital cameras, coupled with the huge number of camera equipped phones on the market, the danger of mischief is now never far away. Although to be fair, the mobile phone makers in Japan were quickly on to the pervert potential of the camera and phone combo, making each handset produce an inordinately loud noise every time a picture is taken.

But with Japan’s seemingly vast underground network of peepers (even University professors are at it), the battle against such deviants is always going to be an uphill struggle. Fairly recently however, the police managed to score a rare point against the dark forces of perversion.

Last week it was reported that during March, the police in Saitama Prefecture (just north of Tokyo) captured six members of a gang dedicated to voyeuristic pictures of women taken with concealed digital cameras. The group came together after meeting through an internet site dedicated to their unique brand of photography. And to make their operations more covert, they each adopted a nickname. One of the men rather optimistically calling himself ‘Beckham’.

But the gang’s downfall came when they were caught trying to ‘photograph’ a 20-year-old shop clerk. One member of the group engaged the unsuspecting woman in conversation, whilst the rest of the members approached her from behind (although presumably not all at once) and captured their desired image. A technique apparently well known amongst upskirt photography aficionados.

After the gang’s no doubt embarrassing arrest, one of the members said, â€œI wanted to get shots that my colleagues would praise.â€ Whilst another was quoted as saying, â€œNormally, a person takes upskirt photos on his own. But we did it in a group in a bid to improve our technique.â€

What charges will be brought against these men remains to be seen, but in the future lets hope they don’t get their hands on one of these little wonders. 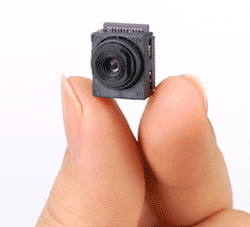 Heaven knows what kind of trouble such men could get themselves into with a camera that small.